Yesterday the weather was dreary.  Here it is March and spring is teasing us with the usual crocus beginning to bloom while the weather also includes a blizzard north of here.  I decided I wanted a hot pot of beef short ribs cooking.  Surely a house filled with short ribs cooking could fend off the dreariness.

So, I started the process in the morning shortly after breakfast.  Brown the short ribs in a hot skillet, then let them start to simmer.

After the ribs were cooking nicely, time to start adding the veggies–onions, celery and carrots.

Everything went well, added a little beef bouillon, bay leaf, and pepper.  I wanted the carrots to have a little sweetness so added about a teaspoon of molasses sugar.  Off I went to do some more chores while this simmered. 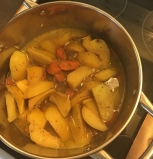 After eating lunch, I added the potatoes.  I chunked up the carrots and potatoes rather large so that the pot turned out almost to a stew rather than a roasted style meal.  And that started me remembering a trick my mom did.  Mom would make drop biscuits and add them in at the end.

Comfort food has the potential to turn a dreary day into a bright bit of sunshine.  The day outside might not be sunny, but the smells coming out of the kitchen certainly keeps spirits bright.  So I decided to add in an apple pie, too.  I had made pie crusts a couple of days earlier for lemon pie, but I had doubled it  and had enough for a double crust pie, too.

But to finish the short ribs.  When I added the potatoes and realized I needed more space for the biscuit dumplings, I even had to transfer from the skillet to the stew pot.  I lost the layering effect, but at least I had time for the drop biscuits.

I use the low-fat Bisquick when I make drop biscuits, and it only takes about a cup to make enough to fill the pot.  Now I do not use the drop biscuits in the stew pot very often, but I was looking for the old country cooking feeling, so in they went. 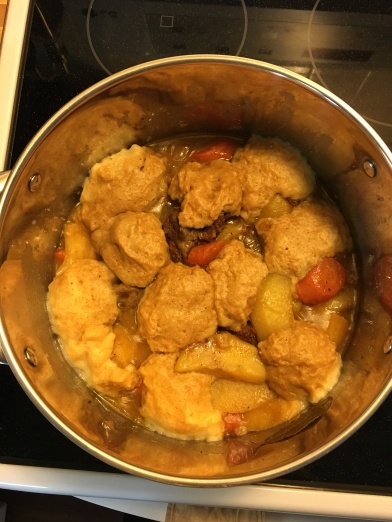 Admittedly the pot lost the vibrance it had visually when I started adding in the potatoes and the biscuits because the carrots’ bright orange disappeared, but I couldn’t wait to taste the final dish with those drop biscuit dumplings.

I was surprised to discover the biscuits turned a tan color and I can only guess that came from soaking up some of the broth.  Yet the flavor was familiar from my tastebud memory.

My comfort food met my expectations, but I did learn that it was not the same for my husband.  He is not a fan of the biscuit dumplings.  Still, there is just enough for a leftover lunch for me.  I guess the comfort food with perk up my day as the blizzard weather way up north may bring in a few snowflakes here in Missouri.

Oh, the apple pie, you ask.  Well, I think that won over the tastebuds.  I certainly know the aroma filled the house will I was baking it.