Meal time can easily be a problem, especially as we cook two or three times a day.  But I find that figuring out how to keep meals from being so routine that it losses appeal just because it is a frequently repeated menu.  My tendency to avoid boredom and think “outside of the box” also known as lateral thinking reaches right into the kitchen.

Sometimes this tendency is not well-received, but I just can’t keep from trying out something new or different despite the “Can’t you just leave well-enough alone?” litany that pops up when I do step outside of the box–or in this case, the cookbook.

Last night I wanted to use some grilled smoked sausages that I had left over.  The local meat shop Alwell’s offers a variety of precooked sausages in a range of flavors at a very reasonable price.  The ones that were left over from grilling were blueberry chipotle flavored.  I just could not think of an interesting way to do it until I thought about a skillet meal.

The problem that I faced was how to fix a meal that could be left warming while I had to leave for another softball game.  I did not want to waste the leftovers, and I needed something new.  Hence I started thinking about these sausages.  They are a bit on the spicy side, but sweet, too.  Hmmm.

I began running through a list of options and suddenly remembered I had a box of hash browns.  I picked it up, sliced up the sausages and began cooking.  Granted there are no major surprises in a meal like this, but since the advent of Hamburger Helper, every once and a while you need a one-pot

The problem I have with pre-packaged products is the excessive salt and additives that are in them.  I understand the need for preservatives and taste, but I have fun with creating those elements to a dish on my own.

When the obituary and features came out last week about the famed restaurant owner, Mother Gibbs, aired, I was reminded how much cooking is not about following a recipe but knowing what works together.  Therefore, when I thought about the sausages, I thought what would go with them and potatoes seemed a winner over pasta, rice, or even other veggies.

This brings me back to the hash browns.  I do not make my own from once baked potatoes, and I often have used the famous O’Dell’s Hash Browns.  Lately though, I have discovered that dehydrated packages of hash browns, much like instant potatoes, have self life

and are easy to work with.

The boxed version are reconstituted with hot water, which comes out of my tap hot enough to scald the skin, so I filled the carton with water, sat it aside, and sliced the sausages into the skillet.  As it began warming up, the skillet is also being prepped for the hash browns.

Such a simple solution for a quick and filling supper.  A one-pan wonder, so to speak.  The spice of the sausage flavored the hash browns.  I could have added some onion, peppers, even carrots or zucchini, but I kept it simple.  Isn’t cooking one of those processes that the effort matches the clock rather than the taste?

The dish was ready in about 15 minutes after the potatoes were reconstituted, And it 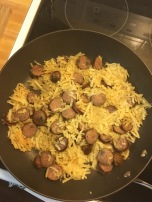 was easy to keep warm until everybody was ready to eat.  Something different, yes, but certainly worth duplicating again when the calendar dictates different meal times or everybody is in a hurry

Cooking off the top of one’s head is part of everyday life.  Mildred Council, famous restaurant owner of Mama Dip’s Kitchen in Chapel Hill, NC, knew what worked and carried into a thriving business.  Maybe more thinking ‘outside of the box’ needs to be part of our menu planning, too.  This little experiment certainly turned out to be yummy, now I want to add a little more to it, too.  Watch out those who gather at my table, you never know what will show up next.